On April 5, 2014 Wi(PR)2EM and the Science on Wheels Educational Center (SONW) organized and coordinated the NanoDays event at the Mayagüez Mall that we called in Spanish DíasNano 2014.  The Mayagüez Mall is the main shopping mall in western Puerto Rico.  This large event was a collaboration between Wi(PR)2EM and SONW with the participation of students from the NSF funded Nanotechnology Center for Biomedical and Energy-Driven Systems and Applications (CREST). 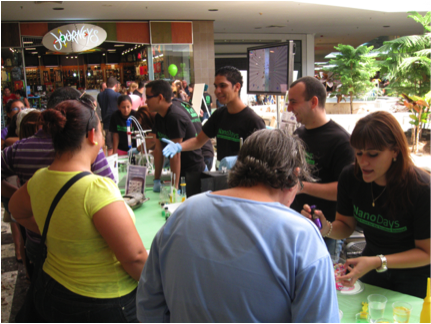 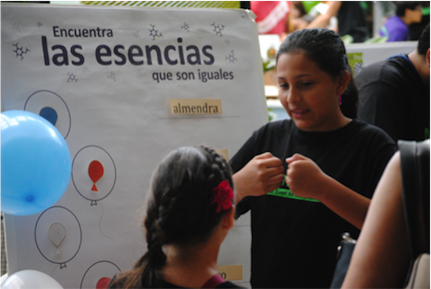 The activity consisted of 4 educational interactive stations and a central NanoPlayground.  DíasNano 2014 included most of the activities included in the NISE Net NanoDays kit plus many developed by the 3 research and education centers.  The first station was named From Macro to Nano and took the participants in a journey from the macro scale, to the micro with light microscopes, and to the nano scale with images obtained with SEM and TEM.  The second station was called Smart Materials and included demonstrations and interactive activities that presented concepts of different materials.  The third station was called NanoBio and included demonstrations and interactive activities that demonstrated the close relationship that exists between the nano scale and biological processes and animals.  The fourth station was called Surface Area, Catalysis and Nanoporous Materials and once again included exhibits and hands on activities that demonstrated the importance of nano scale to everyday events and processes related to catalysis, the environment and renewable energy. 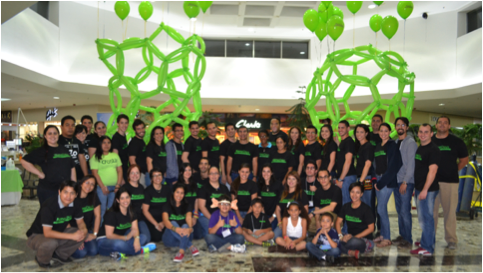 Over one hundred students (graduate and undergraduate, all Hispanic, 50% women), one high school teacher, six K-12 students and four of our UW MRSEC colleagues were involved presenting the interactive activities during the day divided in work shifts.  Over 2,000 persons of all ages, the vast majority of Hispanic origin, were impacted with a variety of fun and educational interactive activities.